In 1936 the Scottsville Free Library Board of Trustees thought books should be made available to the Mumford community. This hamlet serves the western edge of the Town of Wheatland. The books were delivered to the Mumford Post Office, to be overseen by the Post Master John Campbell, who checked them out to the patrons. This volunteer service was continued by several Mumford citizens until May 1943, when a room in the Community Hall (converted from the old Exchange Hotel) was made available as a library. One day a week the Scottsville librarian went to Mumford to help and instruct volunteers at the Mumford Branch. In 1947 Mrs. Ruth Weigel became Librarian, and in a short time the library expanded in circulation and attendance to such an extent that a second room was opened. In 1966 Mrs. John J. Cannon became head librarian.

After the town purchased the Donnelly House in 1971, Supervisor James Guthrie proposed that some space in the building be made available as a permanent home for the Mumford Branch Library. Monroe County Library system Director Harold Hacker and Rosemary Schifferli, Assistant Director, drew up plans for the best use of the space. Scottsville Free library did not have sufficient funds to underwrite the renovation, so it was decided to have a fund drive with the goal of $15,000. The drive was well organized, with door-to-door canvassing and special money-making events. Newspaper coverage and television spots helped considerably. When the new space was ready and the Library was moved in August 1973, the Rochester Democrat & Chronicle ran the headline: “6,000 Books Take a Walk”. The article explained that 44 children and 16 adults had carried the books from their old home to the new one. In October of that year, the entire community was invited to an open house to view the beautiful new Mumford Library.

The Mumford Branch, as part of Scottsville Free Library, has enjoyed all the services, resources and technology of the Monroe County Library System since 1952. 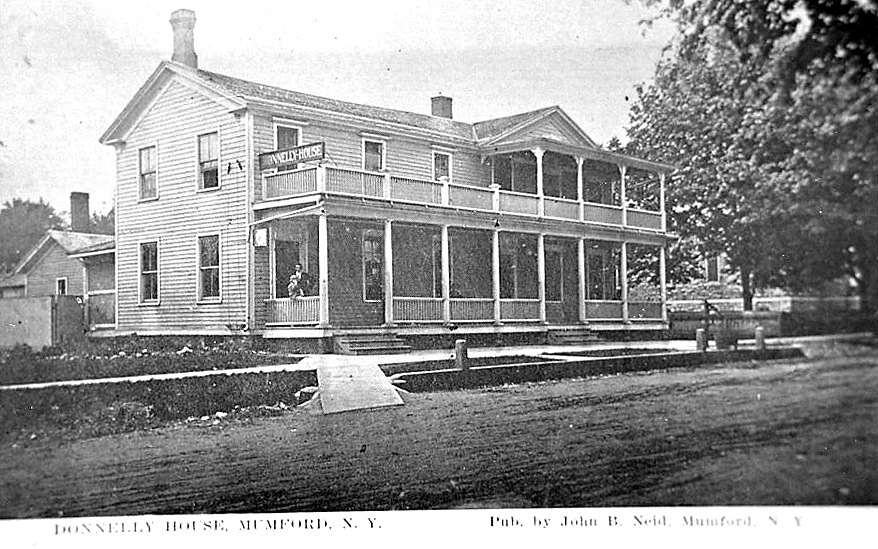 The Donnelly House was originally McKenzie’s Temperance Hotel and Boarding House. It had rooms for rent and a taproom located in the center room on the first floor. It was occupied by the Donnelly family until the early 1970’s but only as a private home. The building had fallen into a poor state of repair. In 1971 the building was purchased by the Town of Wheatland for the residents of Mumford to house the library, Wheatland Historical Office, and a meeting room for senior citizens. It serves the people of Mumford on a daily basis and is a constant reminder of our treasured past.